Last week, the Hatco facility of Sturgeon Bay, WI opened its doors to Senator Ron Johnson (R-WI). The Senator was welcomed in and given a tour by Hatco President and CEO Dave Rolston and other executives. He concluded his visit by speaking to roughly 200 employee-owners.

During his speech, Sen. Johnson mentioned that his mother used to work for an ESOP company and he sees great benefit in the employee-ownership business model. He continued saying that while he does not cosponsor many bills, he will carefully review ESCA-backed legislation S. 742, The Promotion and Expansion of Private Employee Ownership Act of 2013, a bill that was recently introduced in the Senate by Finance Committee members Ben Cardin (D-MD) and Pat Roberts (R-KS).

Hatco is a family-owned company and became 100% employee-owned in 2007. They have continued to be a leader in creating innovative ideas for the foodservice industry since they began in 1950. Hatco manufactures a wide-range of products to meet the demand of the foodservice industry, specializing in “durable warming, toasting, sanitizing, and refrigerated equipment with a dedication to exceptional customer service and worldwide distribution,” according to the company.

Hatco is proud to be an employee-owned company and celebrate their ownership in a multitude of ways throughout the year. One Hatco employee-owner says, “The best part of Hatco has always been the environment. Being employee owned has helped us do things better because everyone listens to each other. We all want to improve the process.”

District visits, like Sen. Johnson’s, provide an incredible opportunity for both ESCA members and employee-owners to connect with their representatives and for Members of Congress to see the benefits of employee-ownership and the hard-working environment it fosters firsthand. 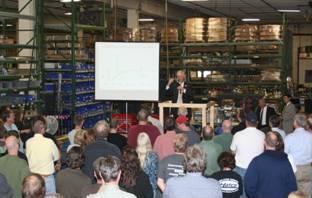 Thank you to Hatco for hosting Senator Johnson!