Senator Franken’s enthusiasm for S ESOPs could not be ignored during his visit with Lifetouch employee-owners. He told them, “you had me at ESOP,” as he explained his reasoning for signing onto S. 1512. “Retirement savings are security, and security means freedom, and that’s what I love about ESOPs,” he continued. 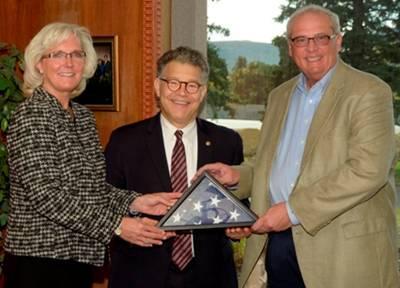 Senator Franken spent time speaking with Nancy Dahl, President and COO Lifetouch National School Studios; Paul Hammel, Chairman and CEO of Lifetouch, Inc.; and several other employee-owners. They discussed how the S ESOP structure has benefited the company since becoming 100% employee- owned in 1978. The ESOP unites many Lifetouch employee-owners through a sense of purpose. In addition, reinvestment in the company and upgrading photography equipment allows employee-owners to execute the highest-quality work.

Franken is a member of the Health, Education, Labor, and Pensions Committee (HELP), which oversees pension policy, so he understands the need to support legislation that helps hardworking Americans achieve meaningful retirement savings. According to the National Center for Employee Ownership, S corporation employee stock ownership plans (ESOPs) are powerful savings vehicles, establishing retirement account balances that are three-five times higher than the average 401 (k) plan. Additionally, 80% of S ESOP companies even offer their workers more than one qualified retirement plan, according to a studying by Georgetown University. But what is special about S ESOPs is that the savings plans are fully funded by the employers, not the workers.

Senator Franken values the importance of preserving and expanding the S ESOP structure, and realizes that new taxes on S Corporations could directly impact American workers and employees’ ESOP accounts, taking away from their retirement savings.

We are grateful to Lifetouch for hosting Sen. Franken and helping bring him aboard as a cosponsor of S. 1512. Thanks for your support, Senator Franken!