Dansko, a leading comfort footwear company based in West Grove, Penn. and an ESCA member company, received a special visit from Congressman Patrick Meehan (R-PA-7) last Friday. The Congressman met with Dansko co-founders Mandy Cabot and Peter Kjellerup at the West Grove headquarters and distribution facility. The group toured the facility and spoke with almost 30 of Dansko’s employee-owners about the retirement security benefits of working at a private, employee-owned business.

Dansko first introduced “Danish” clogs to America over 20 years ago and has since grown from being operated out of the back of a car to having more than 150 employee-owners. The company offers a complete line of footwear products including heels, boots, sandals, wedges, flats and many, many types of clogs. Congressman Meehan mentioned that he was fascinated by the wide variety of products Dansko offers and that his wife – who is a nurse – is a big fan of Dansko shoes, which she regularly wears while working.

Also joining in on the tour was Pennsylvania State Representative John Lawrence who expressed interest in working at the state level to enact policies to grow the number of S ESOPs in Pennsylvania. 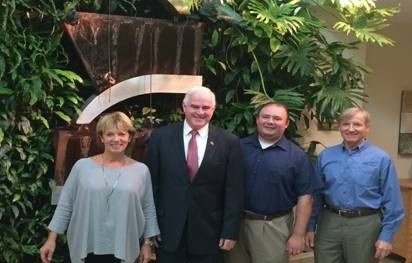 After the tour, Congressman Meehan said he was “impressed not only with Dansko’s business success, but also the company’s long-term commitment to providing for its employee-owners through the ESOP,” and that he was excited to learn more about the benefits of the S ESOP structure. A second-term member of Congress, Congressman Meehan is widely expected to be appointed to the tax-writing Ways and Means Committee next Congress.

According to a report by economist Alex Brill, a fellow at the American Enterprise Institute and CEO of consulting firm Matrix Global Advisors, employee-owned companies that have employee stock ownership plans demonstrate higher productivity and increased economic resilience despite economic fluctuations.

The study also found that, “The S ESOP structure in particular has been show to lead to greater firm longevity and higher wages, wage growth, job stability, retirement plan contributions, employment, and sales than would otherwise have been anticipated.”

ESCA thanks Mandy, Peter and all of Dansko’s employee-owners for hosting Congressman Meehan at their facilities. District events are a great way to educate, engage and inform members of Congress about S ESOPs and employee ownership issues. They have proven to be one of the most effective and impactful ways to tell the S corporation ESOP story and can convert a Member into an active proponent of employee ownership.