Griffin Pipe, a subsidiary of ESCA Board Company Amsted Industries, welcomed the Congressman to the plant, taking him on a tour of the facility and allowing time for him to hear stories from Griffin Pipe employee-owners about their ESOP experiences. Rep. Goodlatte discussed Washington’s influence on the future of employee ownership and expressed his desire to promote and expand the S-ESOP model.

Rep. Goodlatte showed his support for S-ESOPs last Congress by co-sponsoring H.R. 1244, the Promotion and Expansion of Private Employee Ownership Act of 2011, a bill designed to help more Americans gain retirement savings and security through private employee ownership. The bill was re-introduced in the Senate last month by Senators Ben Cardin (D-MD) and Pat Roberts (R-KS) and the House version should be introduced later this year.

The many benefits of employee ownership were outlined in a recent study by Alex Brill, a fellow at the American Enterprise Institute. In the study, Brill says, “the S ESOP structure in particular has been shown to lead to greater firm longevity and higher wages, wage growth, job stability…” all of which benefit both the firm’s bottom line and individual employee-owners. 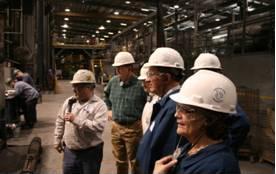 ESCA thanks Rep. Goodlatte for taking the time to visit Griffin Pipe to see the benefits of employee ownership in his district.