WASHINGTON, D.C. – Two-thirds of Americans say they are more likely to vote for Members of Congress who support legislation making it easier for employees to have an ownership stake in their businesses, according to recent polling by Morning Consult released today by the Employee-Owned S Corporations of America (ESCA).

“People want more of a stake in their financial future, and many Americans know sharing in the upside of their companies’ success through employee ownership generates immense benefits – like stable, good-paying jobs and the opportunity to build real retirement savings, among other things,” said Steve Smith, Chair of ESCA’s Board who serves as Vice President/ General Counsel of Illinois-based Amsted Industries. “As Americans face dual challenges of wealth inequality and retirement savings gaps, they want policy-makers to advance solutions that will help them be better off. Employee ownership, particularly through Employee Stock Ownership Plans (ESOPs), offers a tremendous way to do that.” 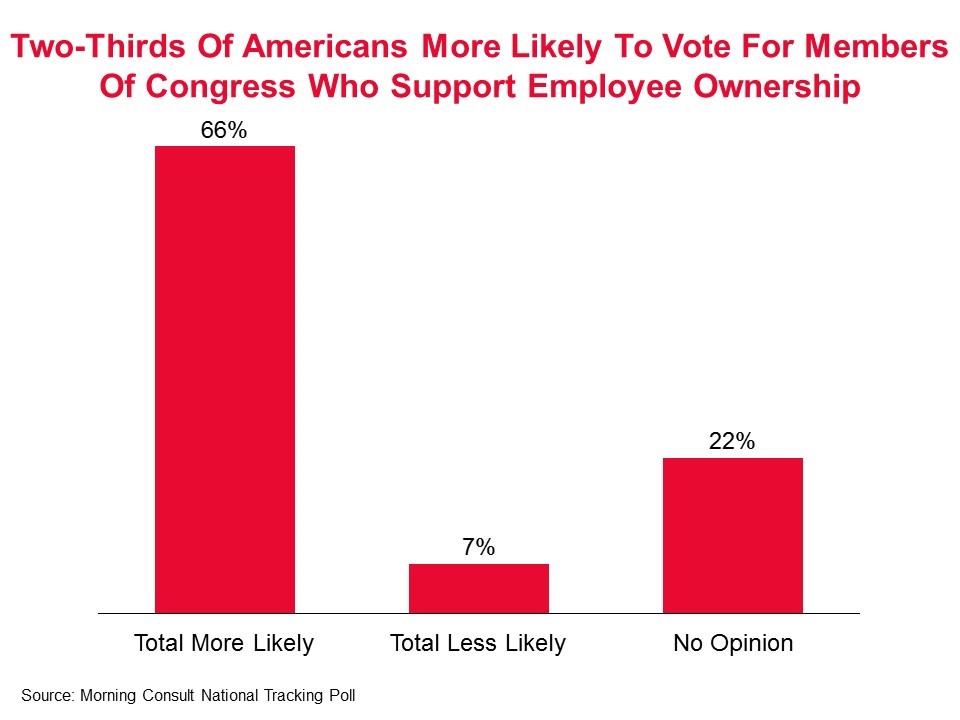 Key findings from the survey, conducted from March 24th to March 26th, include:

S corporation ESOPs provide employees ownership stakes through shares of stock, making them employee owners of the company. Research released in January by Vice President Biden’s former Chief Economist, Jared Bernstein, found that ESOPs reduce wealth and wage inequality. Alex Brill, previously Chief Economist to the House Committee on Ways and Means, also studied S corporation ESOPs and found they grew jobs more than 60 percent during the decade 2001-2011, while the private sector as a whole had generally flat job growth. And Phillip Swagel, who was Assistant Secretary of the Treasury for Economic Policy in the Bush Administration, has written about how, during the peak of the last recession, S corporation ESOP businesses increased wages at twice the rate as other companies.

Morning Consult’s polling data is derived from a sample of 2,071 registered voters across various demographics. Participants completed a total of nine questions through an online survey, and data were weighted to approximate a target sample of registered voters based on age, race/ethnicity, gender, educational attainment, region, annual household income, home ownership status and marital status. The margin of error is plus or minus 2 percentage points.

The Employee-Owned S Corporations of America (“ESCA”) is the Washington, DC voice for employee-owned S corporations. ESCA’s exclusive mission is to preserve and protect S corporation ESOPs and the benefits they provide to the employees who own them. These companies have an important story to tell policymakers about the tremendous success of the S ESOP structure in generating long-term retirement savings for working Americans and their families. ESCA provides the vehicle and the voice for these efforts. ESCA represents employee-owners in every state in the nation.