ESCA member companies are off to a busy start this month, hosting Members of Congress at their employee-owned businesses around the country, showcasing the positive results yielded from employee ownership.

This past Tuesday, Senator Chuck Grassley (R-IA), a senior member of the Senate Finance Committee, paid a visit to Griffin Pipe, a subsidiary of Amsted Industries, at their Council Bluffs, IA manufacturing facility for a meeting and tour. Senator Grassley spoke with Griffin Pipe’s employee-owners as he toured the facility, allowing them a chance to explain how their ESOPs (Employee Stock Ownership Plans) have affected them both personally and financially.

When asked about the policy issues surrounding S corporation ESOPS, Senator Grassley not only expressed his personal support, but spoke about the broad support ESOPs have in Congress.

Senator Grassley’s visit was well-timed, as Senate Finance Committee leaders Senators Max Baucus (D-MT) and Orrin Hatch (R-UT) have recently released a tax-reform proposal that would start with a “clean slate,” and then provisions would be added back in.

The S ESOP model has bipartisan support in Congress because it truly provides economic value from employee-owners saving for retirement to the broader economy as a whole. Economist Alex Brill, former advisor to the Simpson-Bowles bipartisan deficit reduction commission and a fellow with the American Enterprise Institute, released a study showing that private employee stock ownership plans (ESOPs) organized as S corporations increased employment over the last decade more quickly than the overall private sector. 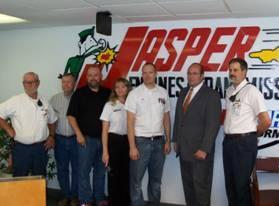